News Archive Event Under the tail at Jelačić Square

Under the tail at Jelačić Square 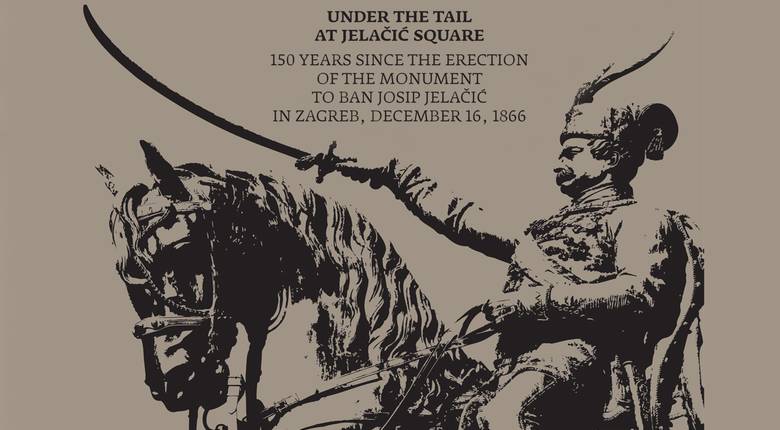 Title: “Under the tail at Jelačić Square // 150 years since the erection of the monument to Ban Josip Jelačić in Zagreb, December 16, 1866

The grand unveiling of the monument to Ban Josip Jelačić was held on Sunday, December 16, 1866.  The paper Pozor (which later became Obzor) covered this special occasion in the following words:

“The people have raised a monument to the Croatian Ban and not to the Austrian general, the Ban he was in 1848.”

Exhibiting a maquette of Ban Josip Jelačić Square, we would like to remind our valued visitors that the appearance of the Square has changed, the old houses have given way to new and bigger buildings, and the proportions of the Square have also changed, particularly since the great earthquake of 1880. Our faithful model made to a reduced scale and with a lot of details presents the Square the way it was at the end of the 19th century.

The equestrian monument to Ban Josip Jelačić with drawn sabre originally faced northwards, in the direction of Hungary.  From a political point of view it was put up at the very last moment, before the signing of the Austro-Hungarian Compromise. Thereafter, the square and the area immediately next to the monument have been places of public gatherings, for the expression of dissatisfaction and demonstrations against the regime.

The public space of the Square and the monument to the Ban also figured in the private lives of Zagreb people. For decades, people would agree to meet (for dates, for example) “under the tail”, and after the monument was removed, the empty central space in the memory of the community was, to an extent much later too, replaced by “dates under the clock”.

What happened to the monument? This symbol of Croatian pride and the fight for freedom was removed for ideological reasons under the cover of night between July 25 and 26, 1947.

One of the first moves of the democratically elected government was the restoration of the monument and the name of the central Zagreb square. The monument was put back in its place after 43 years and was officially unveiled on the Ban’s birthday, October 16, 1990, this time facing the south.